In the Greed Island arc of the manga Hunter x Hunter, the main characters enter into a video game called Greed Island. Within are 100 magic items that they need to collect in order to complete the game. Selecting for which are most translatable to 5e mechanics, I have begun converting these items into 5e DnD Magic Items. Here are the first four magic items: 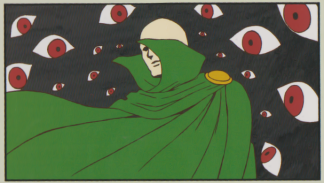 A nondescript cloak with a a high collar and a single bronze clasp, this garment completely shields its wearer from prying eyes.

An attuned creature wearing this cloak cannot be scryed or divined upon by any spell cast below 7th level, nor can they be visually identified by another creature unless they want to be. This does not make the attuned invisible to the eye, but rather renders them an unrecognizable face in the crowd. Additionally, it grants the attuned wearer a +2 bonus to Dexterity saving throws. 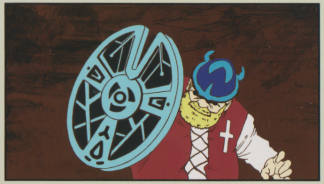 A circular shield adorned with dwarven runes. Despite its age, it shares nary a sign of weathering or abuse.

This shield has 3 charges. An attuned wielder can as an Action expend 1 charge to cast the spell antimagic fieldcentered on the shield without components and without the need to concentrate, although the duration is reduced to 1 minute. The shield regains 1d4-1 expended charges at the start of each dawn.
In addition, spell attack rolls against the attuned wielder of this shield are made at disadvantage, and the wielder is immune to any magical effect that would forcibly move them. For example, the attuned would be immune to the effects of the spell Banishment and the effects of an arrow from the Quiver of Frustration, a magical item found later in this list. This immunity does not extend to things like magically conjured octopus tentacles that grapple and forcibly drag creatures. 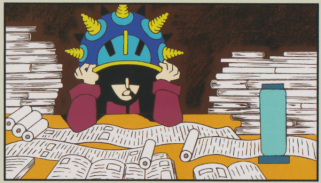 You will never forget things you see or hear while wearing this helmet. Unfortunately, it’s extremely large and heavy. Weighs 50 lbs.

The wearer of this helmet gains a +5 bonus to all intelligence-based ability checks and Intelligence saving throws, but has their speed reduced to 10 ft. Once taken off, the helmet’s user can recall everything they saw and heard while wearing this helmet with exact detail for the next 24 hours, after which such memories fade. 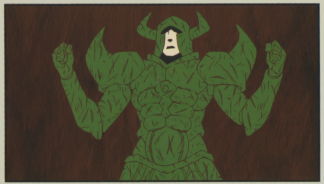 This grisly set of armor is covered in battle scars that can never be mended. Each time its special ability is used, a new permanent scar appears.

Once per long rest, a creature wearing and attuned to this +2 armor can render ineffective one attack made against it – all damage and effects that weapon attack would render is completely mitigated. Its wearer can choose to use this feature after it hears what the damage of the attack would be.
When you use this ability, roll a d20. On a 1, the armor disintegrates. If the individual wearing and attuned to this armor is targeted by a Disintegrate spell, the armor immediately disintegrates and the individual is unaffected by the spell. Heavy Armor Only.

I am an avid creator and balancer of 5th Edition Dungeons and Dragon Homebrew. I primarily enjoy homebrewing full DnD Classes, which is the most masochistic thing you can do in DnD Homebrew. I also like to write articles on homebrew design and running DnD games. View all posts by Leuku